Many of you know that Pete and I have been friends for a long time.

Since second grade, in fact.

While we met in Florida, we’ve lived at opposite ends of the country for the past 30 years or so.

I guess that’s good in some ways.

As in, that’s what happens when we’re together.

In part, we started Dadand because of our distance. And because of Dadand, we get to travel, do cool stuff, meet awesome people and pickup the shenanigans right where we left off 30 years ago.

Okay, so the only thing missing is chainsaws.

And that’s exactly what Stihl Incorporated added to the mix when they invited us to check out their factory and some new outdoor power equipment.

Let’s start by saying we’re not condoning the use of tools and alcohol. It was just a throwback to Mad Libs.

But the Stihl team began by giving us a factory tour.

Kinda like How It’s Made, but a lot more walking.

So I don’t have all the facts, but I’d say they make like 90% of their stuff in the good ‘ol USA. And when I say “make,” I mean they make it, not just assemble it. From chainsaws to blowers to string trimmer line—it was all happening right in front of our eyes.

And while there was some cool automation, there were a lot of real, bearded, flannel-wearing, clock-punching, black-coffee-drinking people behind these great products.

Alright, I had to paint a picture. They weren’t all like that, but that’s what I imagined on the plane ride up.

I also imagined a giant warehouse, on a treeless site.

We were welcomed to a 150-acre complex with all kinds of buildings, warehouses, dealer-training centers—even a cafeteria.

Oh, and plenty of trees.

The best part was the “proving grounds.” I’ll talk about that later. 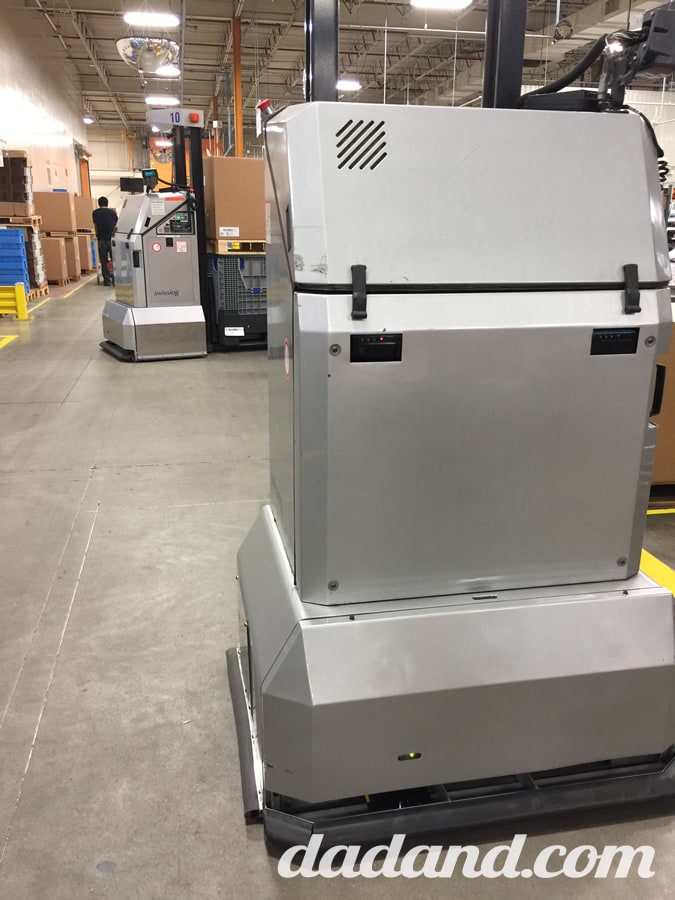 There was quite a bit of automation, but the coolest thing were these autonomous forklift robots. They were driving around everywhere, picking parts and delivering components to assembly stations. They knew where to go and had some laser-sensor-things to ensure you wouldn’t get run over. The robot would just stop and patiently wait for you to move. And of course we started holding them up on purpose. 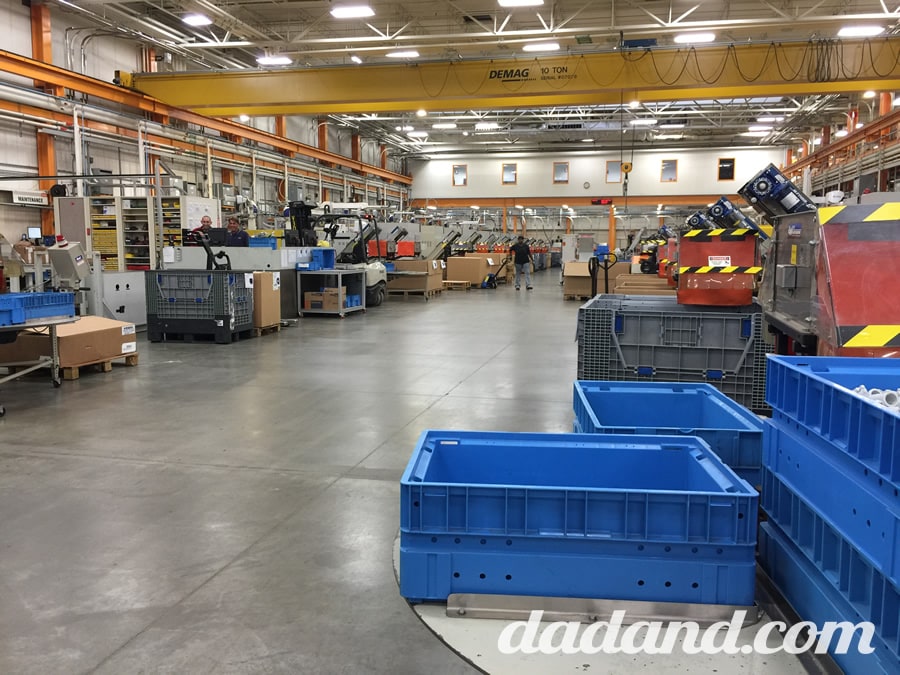 We were limited on the number of photos we could take in the factory, as they had quite a bit of top-secret, proprietary machinery. So this wide shot is from the injection molding area of the plant. From fuel tanks to plastic shrouds to buttons and handles, it was all made right here. 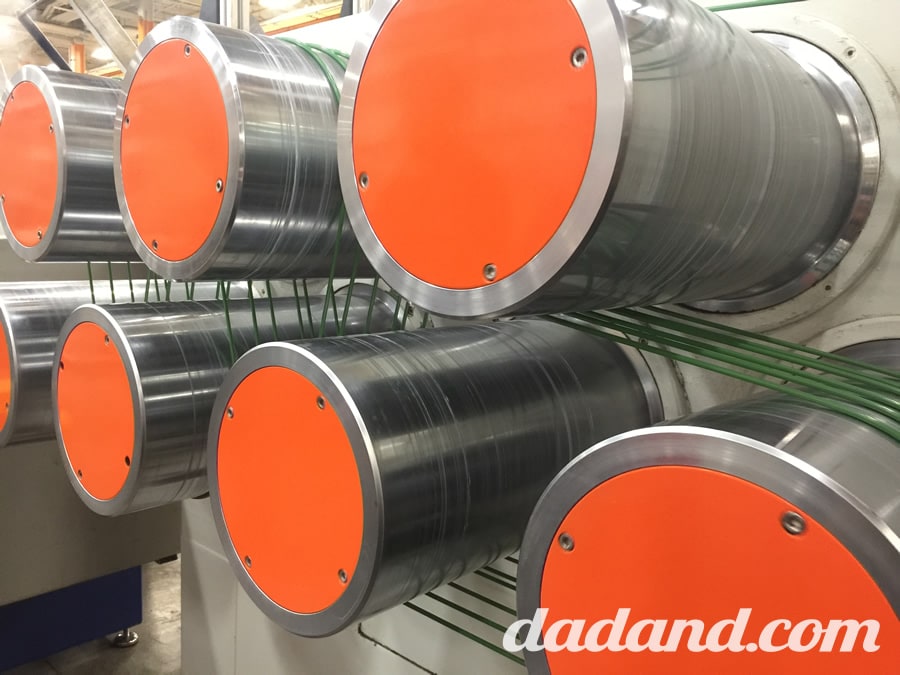 We got to see string trimmer line being made—from raw plastic pellets through extrusion, cooling and coiling to final packaging. Our guide mentioned that over the years their manufacturing grew because they would have trouble with suppliers, either in supplying materials, meeting order quantities or in quality control, so Stihl just started making things themselves to ensure it was the best stuff you can buy. 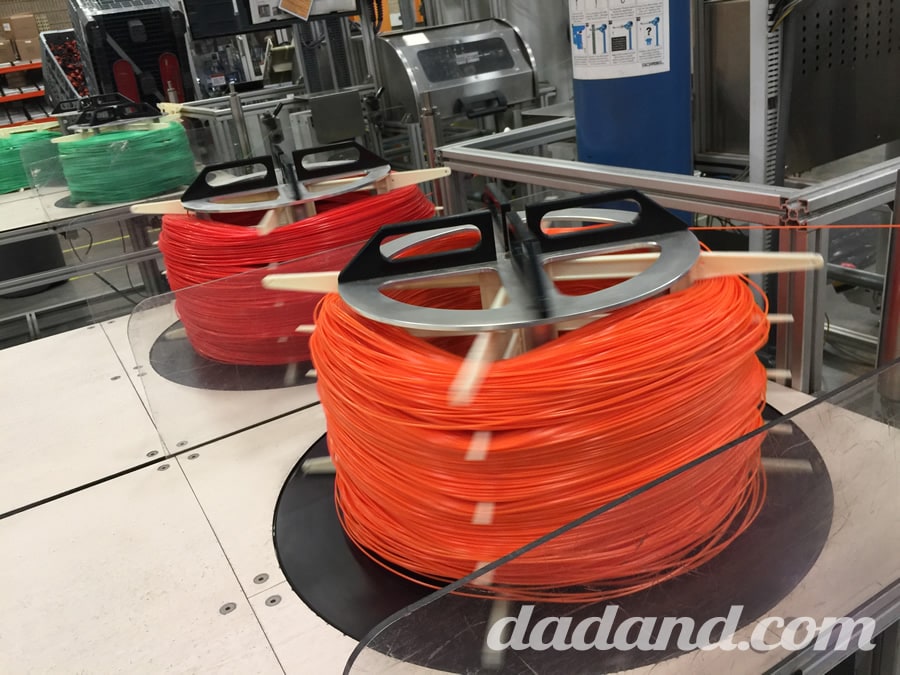 String trimmer line being wound for final packaging. The colors aren’t to coordinate with your purse and shoes, they designate different line diameters. 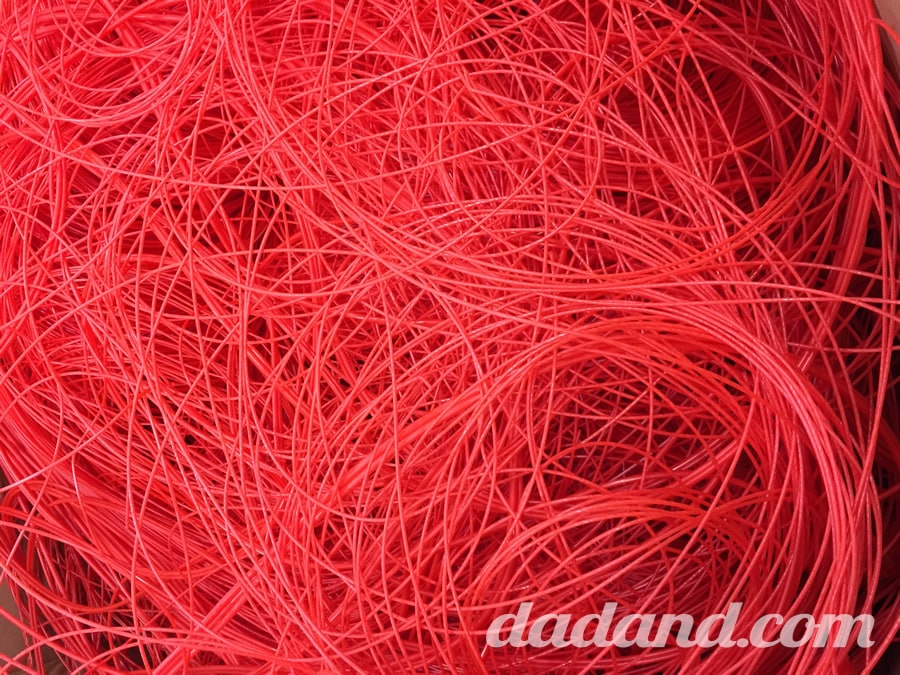 We saw giant bins of “waste” string trimmer line. Our guide said it might have been from the beginning of a run, generated while they were setting up the machines to get the right diameter. The good thing is they said it is all recycled back into new line. 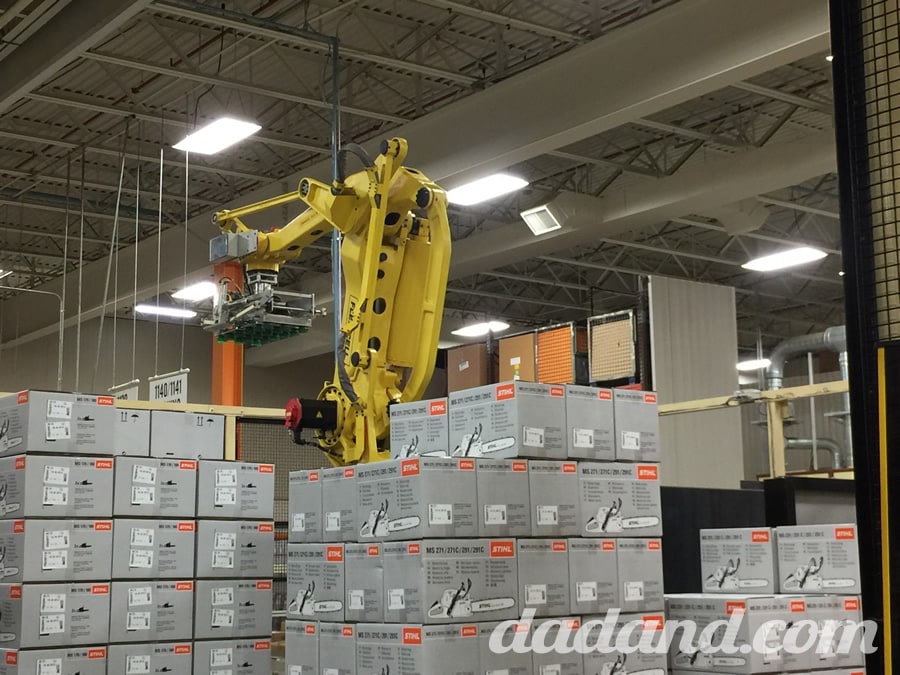 This robot, surrounded by boxed chainsaws, sits at the end of one of the chainsaw production lines and simply stacks palettes 24/7.

I mentioned the “proving grounds” earlier. I don’t know if that’s what they called it but essentially there was a building and adjacent yard that was setup for using the equipment.

Logs, hedges and plenty of grass to cut, chop and mow using the latest and greatest Stihl equipment.

I imagined Sthil employees on their lunchbreak out there cutting stuff for fun. They probably imagine just eating lunch.

While famous for easy-starting, fuel-powered equipment—the kind the pros use, Stihl is launching three lines of battery-powered systems.

And we got to put them all through the paces.

If you have a small yard or a condo, then this is the system to consider. The AI line has integrated batteries, allowing you to just plug in, charge and be ready to trim. The MSRP is more than competitive with the stuff you’d see in big box stores.

Stihl’s AI System is great for occasional use and features a blower, hedge trimmer and string trimmer. I’m not sure how to define “occasional” but that’s what they told us—probably a lot more often than my 80 year old French Canadian neighbor washes her car. (twice annually). Seriously though, even she could get out there with this AI system. It’s light and gets the job done.

Stepping up to a removable battery platform has its benefits for extended use—like when the kids grab the blower and spend an hour on the driveway leaving it messier than it was after you mowed. There are two battery sizes, the AK10 and AK20 (the latter giving you longer runtime) with integrated charge meters. Again, the pricing is really competitive with what you’d find in bog box stores.

Maintain your suburban homestead with the AK system, including a hedge trimmer, blower, string trimmer and chainsaw. 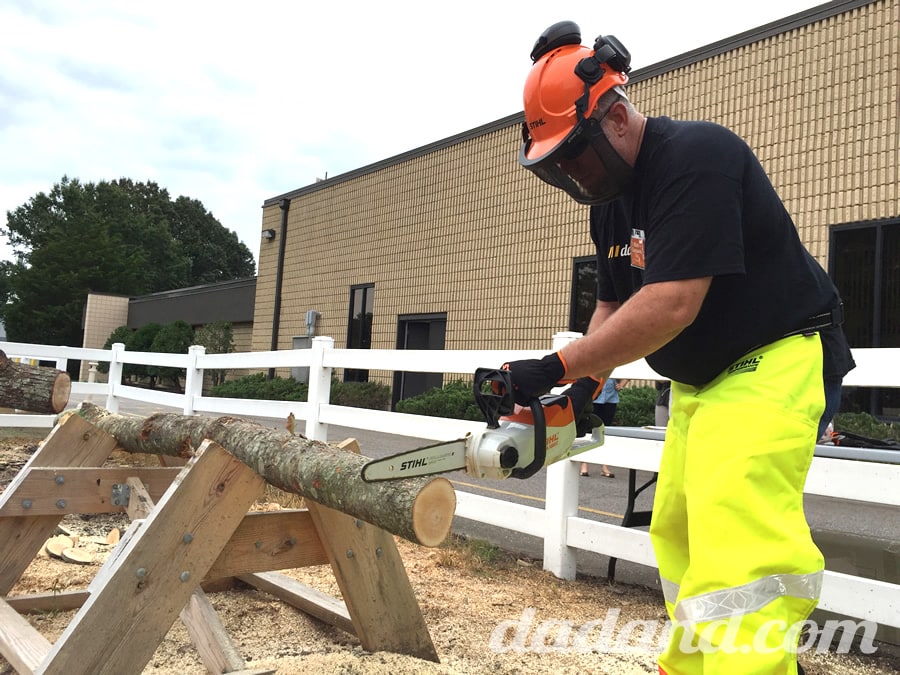 I tried out the AK system chainsaw. It was at this point that I realized how dull my chainsaw chain at home actually is. More on that later.

Just one part of the new line of products coming soon from @stihlusa. It will all be on the blog October 19th. #stihlsummit

AK10/20 battery in the back of the AK system blower. 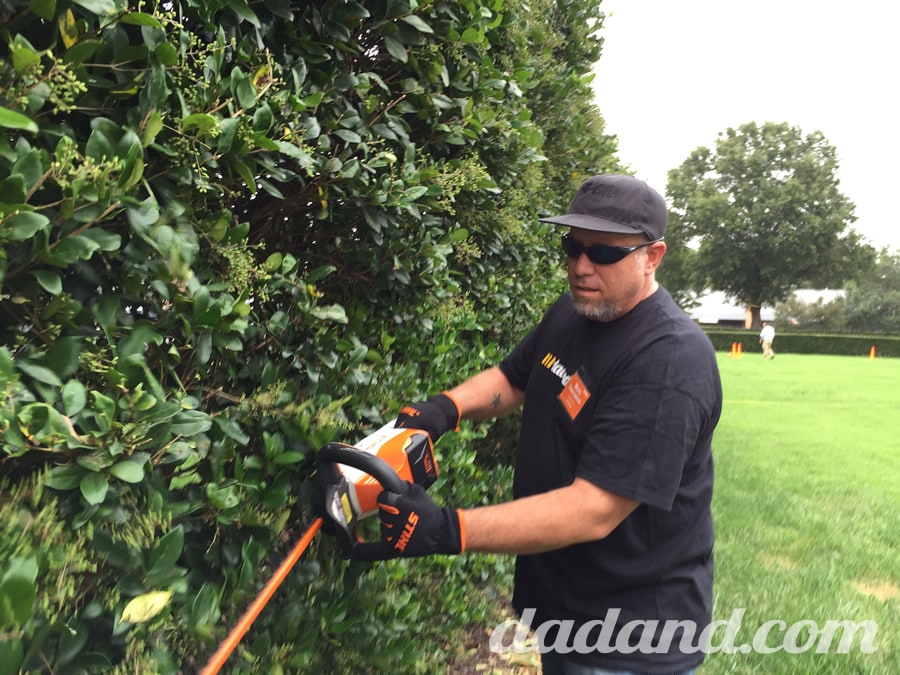 We felt sorry for these hedges. They must not cut them all year long and then one day…

This 36v battery platform features removable batteries with charge indicators that fit into the tool, but also offer belt and backpack versions of batteries for reaallllly long runtimes. The AP System is for the professional and the “prosumer”—you homeowners who have some demanding landscape challenges. Choose from three different mowers, two pole pruners (one is telescoping) and two hedge trimmers (again, one is telescoping).

Some of the offerings in the Stihl AP Lightning Battery System. 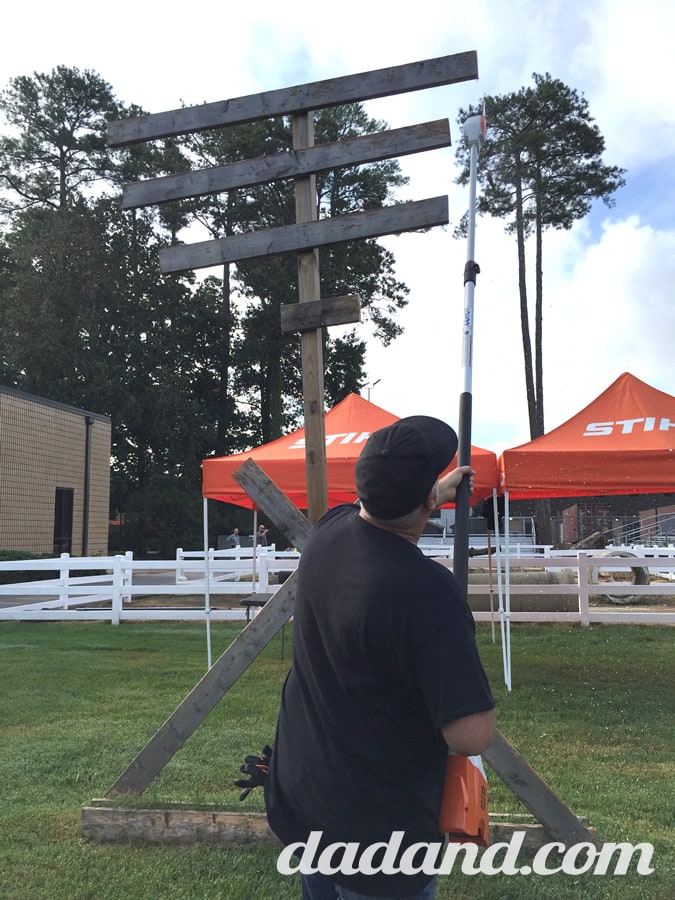 I’m teaching some 2x4s a lesson with the telescoping pole saw.

We tried out all of the Stihl Lightning line, but the coolest was this battery backpack that plugged into the BGA100 blower. The backpack was maybe 15lbs. and was lighter and quieter than their proven fuel-driven blowers.

Pete testing out the fuel-powered blower to compare to the battery-powered version. Both blew balls.

It wasn’t all product…product…product. Stihl is a sponsor—actually, they invented, the timbersports series. You know, those guys on TV that compete by chopping logs? 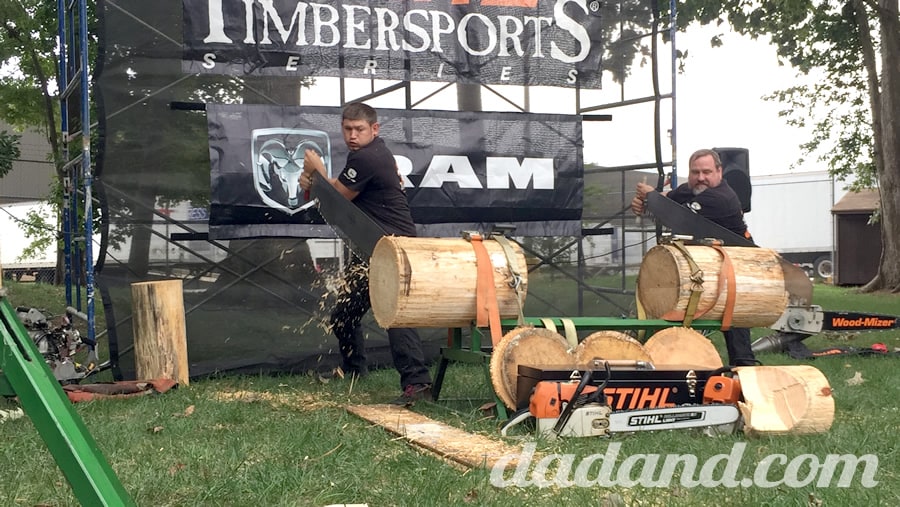 Some ‘ol-timey log-sawin’. The pros went first. Then they let us give it a try. It was not easy, I broke a sweat just watching Pete do it. 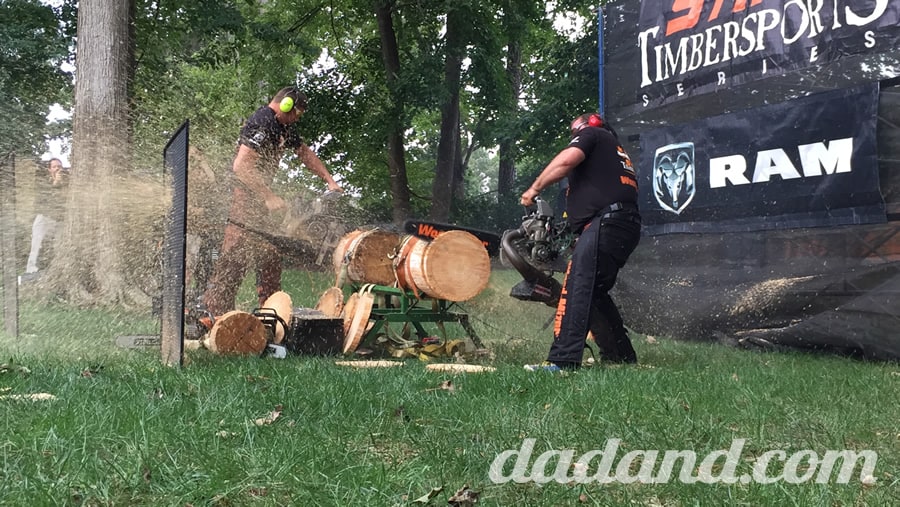 Hot saw close up. Basically, a 2-stroke motorcycle engine with a giant blade to maim logs as fast as possible. We learned stuff. Like how to properly sharpen a chainsaw blade. Guy showing us how to sharpen said the moment your chain hits the dirt or a rock, it’s dull. Well, mine’s been dull at least 200 times. Now I know how to sharpen it. We carved stuff. With chainsaws. Yeah, they actually cut us loose with real live chainsaws and a log and let us go at it. (Waivers were signed). Pete carved a big “F” which I assume is for “fancy.” 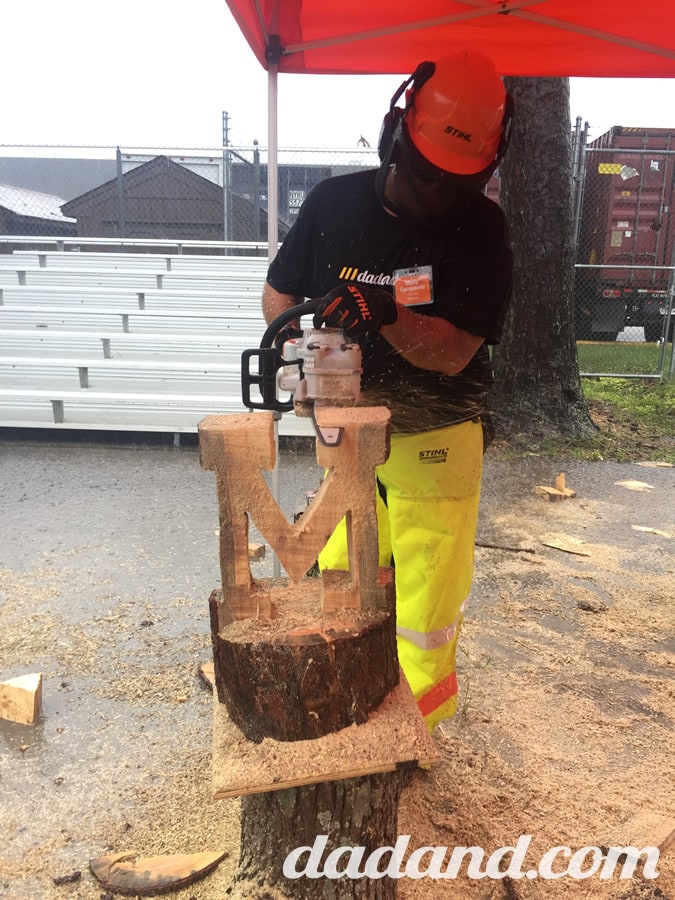 I carved a giant “M.” It stood for “monsterous downpour,” which is what happened just as I started carving. There was a literal river of water and sawdust underfoot moments after this was taken. After doing a bunch of really dangerous stuff, the Stihl team said, “Hey, these arborists are going to show you how to climb these 80ft. trees…let’s go!” Pete made it to the top. Then started swinging from one tree to another. I got like 15ft. up and my acrophobia kicked in. One last random image. The whole time we were there, this aircraft carrier sailed circles, maybe a mile or two(?) out to sea. Fighter jets and helicopters took off on course for it, (what seemed like) every five minutes from the military base right behind the Stihl campus. Awesome.

Anyway, the full Stihl Lightning Battery System line is coming out in the Spring of 2017, and you can get it at your local Stihl Dealer (not in big box stores).

So that’s it. A nice trip to catch up with Pete. A few beers. Tons of Stihl tools. Sawdust for days and a way-too-tight crotch harness to climb a tree with an arborist.

Marty is a dad. He has twice as many family members as he has bedrooms. He does advertising, but would rather work in some type of shop. Like a workshop or repairshop. Or a garage. In fact, he has no garage, so he rents a shop to go and work on his projects, think about advertising or just sit there. In the quiet. But most of the time he is just dad, and that's the best part of this bio.

Monroe Safety Triangle™: What my worn shocks did to my car.